Afrobeat artiste Destiny Obiazi, better known as Omo Dollar , has revealed that he delved into the Nigeria entertainment industry to make an impact on the youth via music medium, noting that music has always been a getaway for him while growing up and he was born October 2
1999.

Omo Dollar noted that he is in the industry to contribute his own little quota in terms of the quality of songs coupled with motivation messages that will be worthy of listening and Although Afro beat is already a global sound worldwide but I’m still looking forward to push Afro beat sound to that A+ level internationally and globally.

The Delta-born singer who is currently living in Lagos, he is set to  release “Dangote” his first single soon which will be highly promoted by his PRO Prince Fredoo Perry.

Omo Dollar is set to drop another amazing banger featuring Lyta in December 2021, Watch Out For Omo Dollar as he takes us to the next level 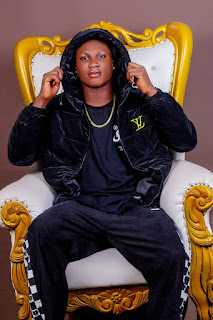 The music act, who is fondly called as Omo Dollar , despite being Based in Lagos is also famous among fans for his songwriting skill, he finds the likes of Davido as his role model.

The singer’s music journey, according to him, started at a tender age that many venture into music because of the apparent attendant flamboyant lifestyle, Omo Dollar says it was passion, not pecuniary incentives that drew him to music & he officially started his career few years back.
Omo Dollar is being Managed by Seun Emirate.

The Ika Born artiste ” Omo Dollar ” has shared the stage with renowned acts such as Lyta and many others.

While many of his colleagues dream of getting such recognition, Omo Dollar says that it’s just one of a long line of feats he intends to achieve in the industry as he restates his ambition to take Afrobeat to the global centre stage.

Reach Out Omo Dollar Via Social Media via IG: @Officialomodollar_1